Marmite – Love it or hate it, do you know how it came about? 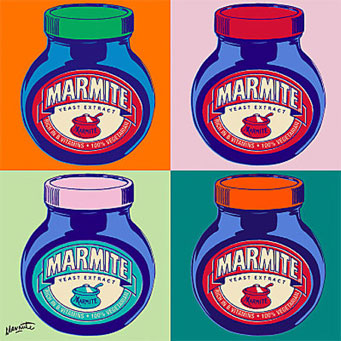 A pot of luck. Marmite was actually created by accident. Justus Von Liebig was a scientist who discovered that brewer’s yeast could be concentrated, bottled and eaten.

French? Marmite is named after a French earthenware pot, as this is what it was packaged in, in its earlier years.

An Award-Winning Goo. Marmite made a real name for itself from the onset, winning two gold medals, one at the Universal Food and Cooking Exhibition (1903) and the other at the Grocery Exhibition (1903).

Marmite Made it Through Both World Wars. As your grandparents may tell you, Marmite was included  in soldiers’ rations in World War 1, as it is packed with vitamins and minerals, especially Vitamin B1. It was also very popular with civilians in the period of World War 2. It was even used as a reminder of home, sent to homesick British peacekeepers and troops in Kosovo in 1999.

A Marmite Sculpture. Yes, there has been a sculpture built in honour of Marmite. Unilever spent £15,000 on ‘Monumite’, now placed next to the main library in Burton-on-Trent.

Squeeze it, spread it, pour it, munch it. In 1974 there was a shortage of the familiar glass jar, so for a period Marmite was sold in standard jam-like jars. Nowadays Marmite can be bought in plastic squeezy bottles, sachets and has even made it as a flavour for Marmite Mini Cheddar Bites, Marmite Crisps and Marmite Rice Cakes.

Mosquitoes are Marmite Haters. Many reports have concluded that the controversial spread is the perfect defence to pesky mosquitoes!

Marmite is now a cult British product (hence Andy Warhol’s iconic piece, Marmite) and has made it through generations of lovers and haters to still be a popular British ‘chuck it in the trolley’ supermarket item.

Marmite is an essential part of our All Day Breakfast Box and our Classic Gastronomy Box, so make sure your expat friends aren’t missing out on this classic treat and grab them a box now!

ROYAL MAIL STRIKES: Due to the Royal Mail strikes on 30th September & 1st October, orders placed to be shipped by tracked post will not be dispatched until Monday 3rd October. Express and standard courier services are not affected by the strikes and will be dispatched as normal.